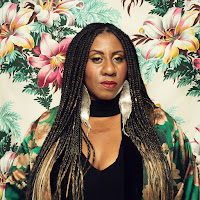 Sonic Flavor: The Lyricism of D Mills by Dixie Treichel ~
A sonic portrait of Minneapolis rapper Diane Miller aka D Mills who creates thought provoking hip hop work that expresses her authentic self and engages the audience with a fusion of sonic flavors.

Thunder Chases Lightning: Vicky Emerson’s Music and Mentorship by Dixie Treichel ~
Vicky Emerson is a Minneapolis based singer/songwriter/producer of Americana music. She co-founded Front Porch Music Group and mentors women with producing their own albums. Her most recent album is Steady Heart.

Time Signatures Explained, Then Deranged by Sheila Regan ~
These Twin Cities musicians go beyond the metronome in their explorations of odd measures. Using uncommon time signatures or, in some cases, no time signatures at all, their shifting uses of time offer a window into the limitless musical possibilities. KFAI’s Sheila Regan visits the Cedar Cultural Center for this Minnesota music story.

Genre Bending Music by A Constant Cough by Dixie Treichel ~
A unique Minneapolis duo which creates electric, reverberating sounds with Victoria Carpenter’s singing and Danny Shaheen on guitar. Their new EP can be heard on Bandcamp.

Annie Mack Finds Her Truth in the Blues by Dixie Treichel ~
Singer-songwriter Annie Mack‘s (pictured) unique vocal presence and original songs will capture your attention. Her soulful and unflinching writing comes from the gut and speaks to the heart. She released two new singles in 2020 and already a new EP in 2021. She was also recently featured in 50 Women in the Blues from Supernova Books.

Fred Case: Photographing Rock Icons in the 1970s by Dixie Treichel ~
“When the Stones Came to Town: Rock ‘n’ Roll Photos from the 1970s” is a book by Fred Case and Eric Dregni published by the Minnesota Historical Society. Minnesota photographer Fred Case shot hundreds of photos of Rock and Blues musicians in the 1970s, both in the Twin Cities and when he traveled. His images capture the stars in action onstage and behind the scenes. His stories about photographing and talking with music icons are relayed in the book by Minneapolis writer Eric Dregni.

One Night Only: The Beatles in Minnesota by Britt Aamodt ~
August 21, 1965, the Beatles invaded Metropolitan Stadium for their first ever Minnesota concert, bringing together a high school photographer with a press pass, a teen dressed to impress, a Catholic schoolgirl and a newspaper intern posing as a waitress for a day they’d never forget. Who knew then that it would be the Fabs only Minnesota concert?