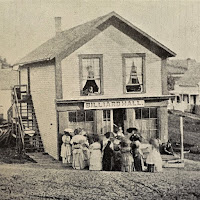 A Brief History of Women in Bars: A Minnesota Story in Three Rounds from MinneCulture ~
One hundred years ago, two major constitutional amendments went into effect. The 18th marked the start of Prohibition and the 19th granted many women the right to vote. It wasn’t a coincidence that these laws went into effect adjacent to one another. The movements were linked in some surprising ways. In this new documentary, Fulbright Fellow, historian, and podcaster Katie Thornton looks at how the state’s temperance movement set the stage for its women’s suffrage movement. But she also looks at how temperance leaders—and, by proxy, many early suffragists—failed to engage many women who weren’t wealthy, White, Anglo-Saxon Protestants. The Minnesota women who didn’t fit that bill empowered themselves in other ways—sometimes through the economic and social opportunities presented by the alcohol industry.

The Bootleg Cocktail from MN90 ~
Ah, the good old Prohibition days. Liquor was illegal and everyone was drinking it. The bartenders at Minnesota’s country clubs concocted a Twin Cities sip that’s still around. Britt Aamodt gets the recipe.

Minnesota 13’s Nefarious Reputation by Ryan Dawes ~
“Minnesota 13” is the name of a corn seed developed at the University of Minnesota to suit the shorter growing season in the upper Midwest. But during Prohibition, it was also used to make exceptional moonshine in and around Stearns County. In an age of bathtub gin, Minnesota 13 was in high demand, finding its way to speakeasies from New York to Los Angeles.